As government officers at the kebelle level, the development agent (DA) Mr. Yonas has a key role in implementing government and party policies. To the people of Yeshat, they are the face of the mengist – an Amharic word which "designates indifferently power as such, the ruling party, the state and all their agents or members" (Lefort 2012, p. 439). Yonas is the DA responsible for Michael goth. He was raised in the woreda capital 20 km down the river and was 21 years old when he moved to Yeshat. After obtaining his diploma in vocational training for agriculture, he subscribed to the EPRDF party to be able to join the agricultural extension office. Like the other DAs sent to the highland kebelle of Yeshat, he was inexperienced. Together with the other DAs and the newly appointed kebelle manager, he set out on his first important job: the expansion of the kebelle council from 60 to 300 people. With the local militia, they selected 280 out of around 900 Yeshat household heads (90% men) for a meeting on governance. The woreda officials had instructed the DAs to select landholding farmers, especially those who held land, were rich, or in leadership positions and could be an example for others. Whereas the main opposition leaders held responsible for the unrest during the 2005 elections were excluded, the landholding birocrasi were included in the new council. Together with the three DAs, 15 teachers, two health extension professionals, one policewoman, and one security guard who were posted in the kebelle, the selected people formed the 300 member council (300 sew conferencegna). 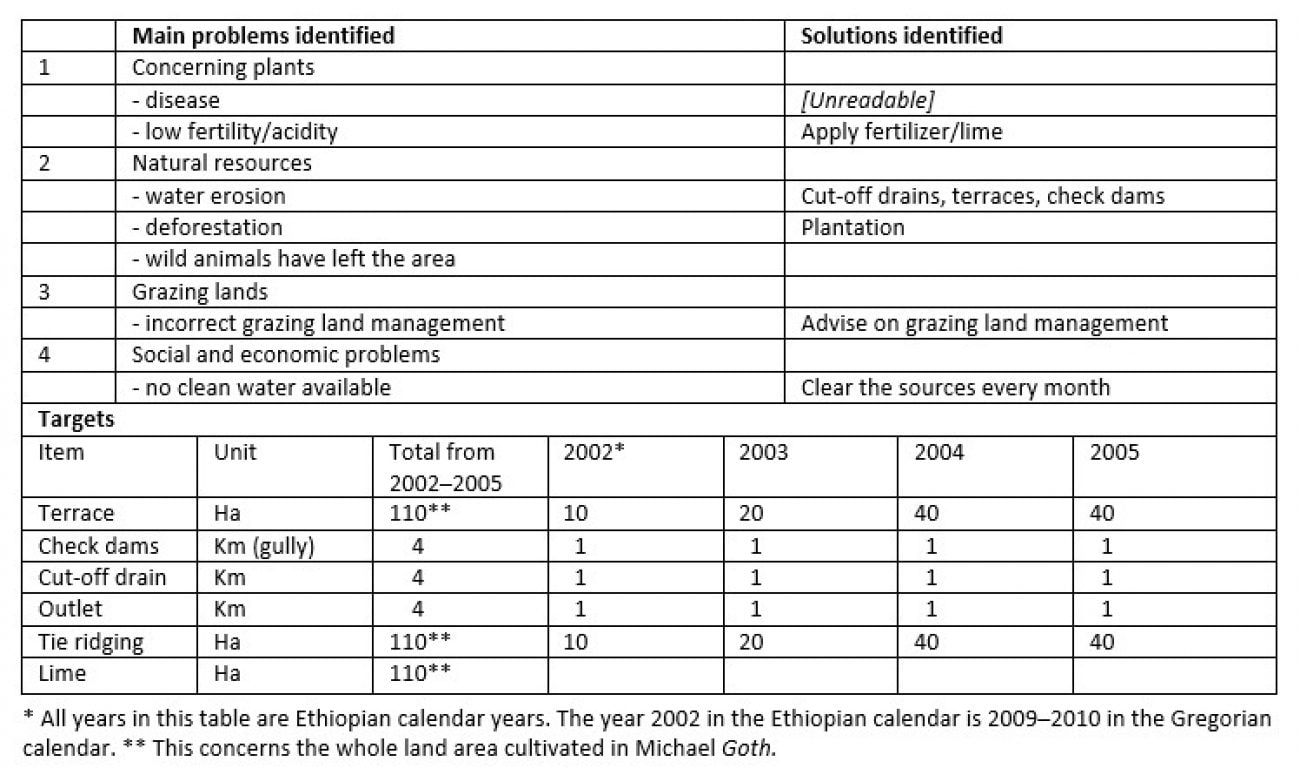 Land has been made the entry criterion for virtually all positions in the numerous development committees in Yeshat. ‘Participation’ and ‘development’ were used by the kebelle office to enrol the selected group in committees to which privileges were attached. During a 14-day meeting, for which all participants were paid 5 birr[1] per day, Yonas and his colleagues trained the council members about democracy and development and asked them to articulate the government’s previous mistakes. In the end, all were enrolled as party members. In a second meeting, the kebelle parliament elected among its members committees for women affairs, youth affairs, societal issues, economic affairs, administration, and peace. For every goth a committee for watershed development was established. Yonas is responsible for giving technical advice to Michael goth and two other goths in the kebelle. With the three committees, he develops almost identical lists of technical problems and solutions (Table 1). The committee members have little to choose as “the woreda expects complete coverage – so we have to put these figures” (Yonas). Once the plan is made, the committee does not meet again. Yonas complains that: “we [the DAs] end up nagging the farmers. We don’t have any other option really. We are like the messengers of the woreda Bureau of Agriculture and administration office.” 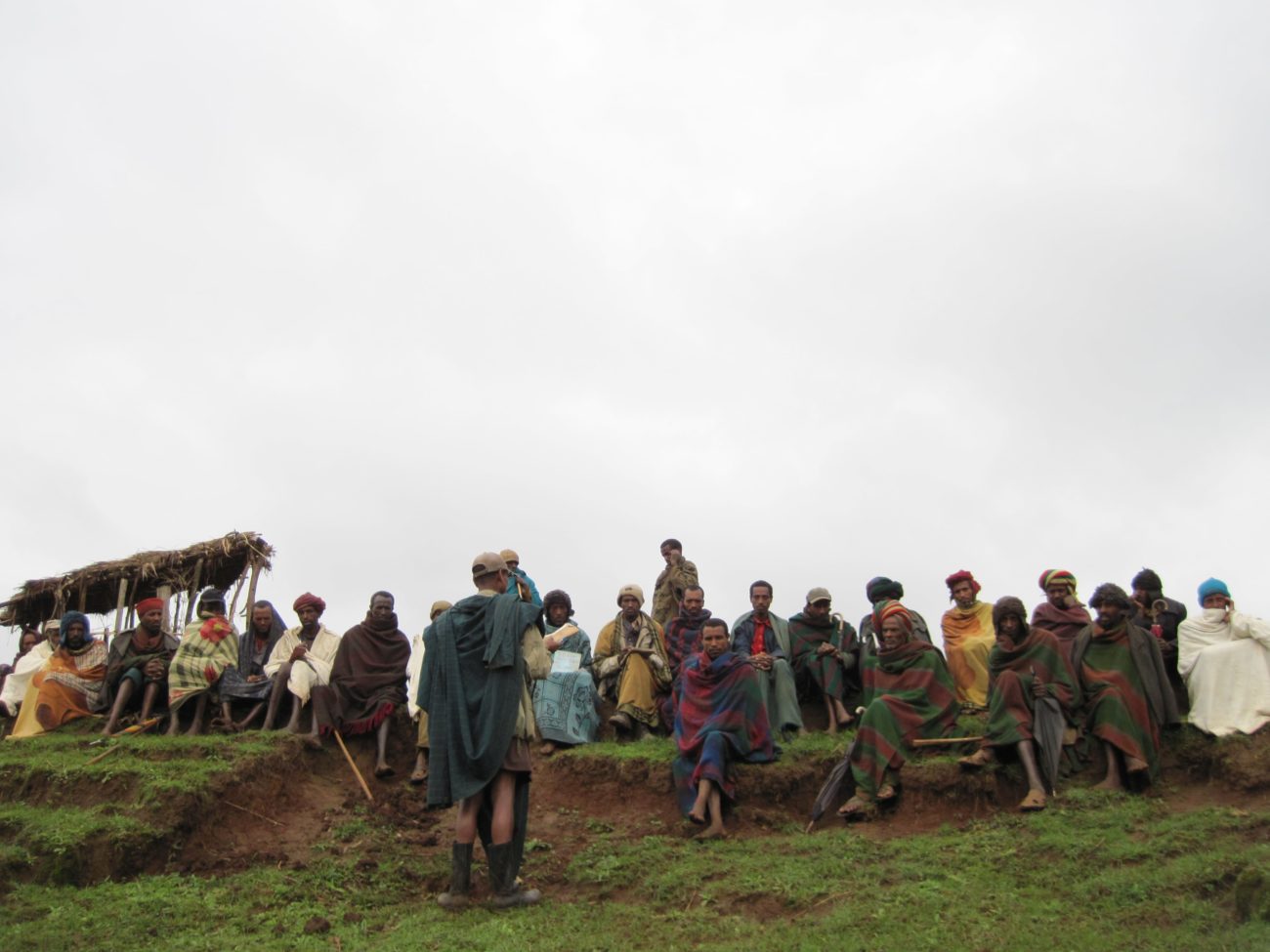 In 2011 Yonas announced that development activities would become the responsibility of the newly established EPRDF political party cells (hewas) established for every goth. Its members are the people in the kebelle council. The leading role of the cell members in the implementation of the development agenda was formalized through their appointment as leaders of the ‘development army’. Cell members were assigned responsibility for the ‘performance’ of five neighbouring households through the so called ‘1 to 5 system’. Every headman reports to the cell leader, who reports to the kebelle manager on a weekly basis. To ensure that the members attend the cell meetings, Yonas organizes these twice per month on Orthodox holidays, immediately before the religiously oriented local organization – the idder – meets. Despite this, participation is usually poor, with less than half of the members participating. The cell meetings follow a fixed agenda. First, the rules are listed and the fines in case of violation thereof. Yonas stresses that the hewas – and not the idder – is the sole authority for upholding the rules. Then members are invited to report on violations of these rules and other subversive activities. Third, Yonas informs the members about development activities that month. Yet, never in the cell meetings is there mention of the most pressing issue felt by the 620 families who are not represented in the kebelle council and committees: the expanding group of people who have no land or only a garden plot – many of whom engage in sharecropping.

Although attendance at cell meetings is often poor, its leaders and those who attend engage in the performance. In return, they receive improved seeds, shovels or steel wire. More importantly, it gives them an advantage in their negotiations with the DA when the implementation of unpopular measures comes up. Government officials are also more likely to provide them support in times of disputes over land or drainage. Together, the members endorse fines for illegal encroachment on grazing land, cutting wood, and blocking drainage, thus producing a peculiar form of community-based participatory resources management. As the ‘development’ activities discussed focus exclusively on the farming domain, the council members model themselves after the image of ‘the farmer’. As their actions align with party interests, they shape party rule. 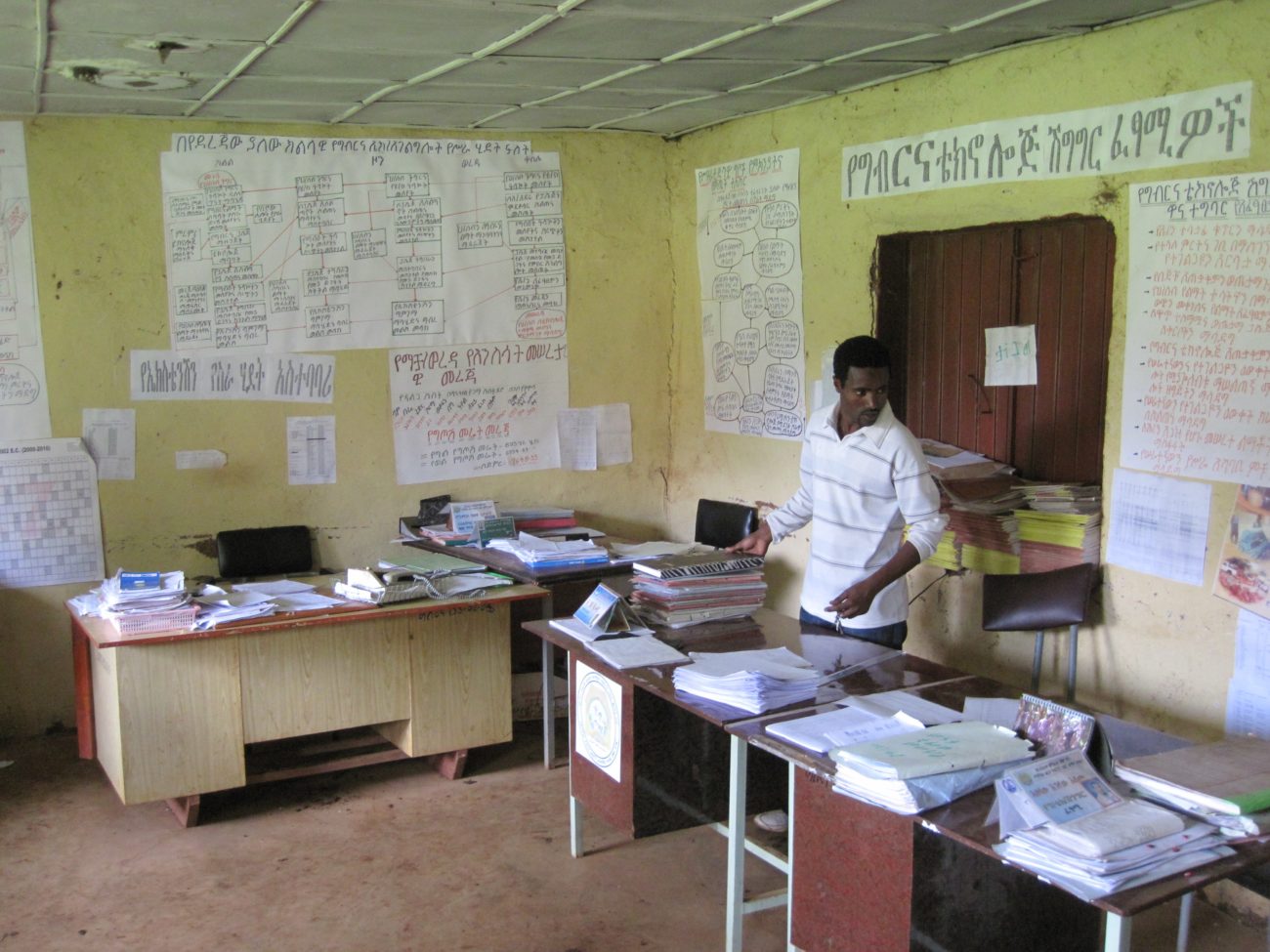 The focus on participatory soil conservation – in its equation with development – serves to keep the bureaucracy together. Who can be against sustainable development? Whereas, for some, science provides a rationale for party rule, for Yonas it offers hope for recognition of his work. Science is not a naive excuse to justify working for a party that he resents. Yonas is proud to refer to the science of the Guidelines for Community Based Participatory Watershed Management (Lakew Desta et al. 2005) in explaining how he knows the world. For him, science provides a way to legitimize his authority and a possible avenue to BSc education. The walls of his office are full of tables and graphs showing progress. Often he refers to his education at the vocational training centre to emphasize the basis of science and policy in his arguments. “If we don’t implement this plan we all go down,” Yonas explains. “We can only escape this if we conserve our soils and transform the economy. Given its good rainfall and high altitude, experts decided that this kebelle will have to focus on potatoes. Others will provide maize that will be an input for an industry that will boost the economy.”