Intensive rainstorms at the start of the rainy season pose risks for cultivation in the Choke Mountains. Whereas government officers and academics often point out that the washing away of fertile soils will reduce soil fertility in the long run, the immediate concern of the ox-plough cultivators in the Choke Mountains is with flooding. To prevent storm waters washing away seeds, fertilizers or young plants, they use the traditional ox-drawn maresha ploughs to plough furrows that can drain their plots. By following a rain drop along the 1 km route where it hits the ground to the point where it drains into the river, we discover that the practice of drainage is far from self-evident. 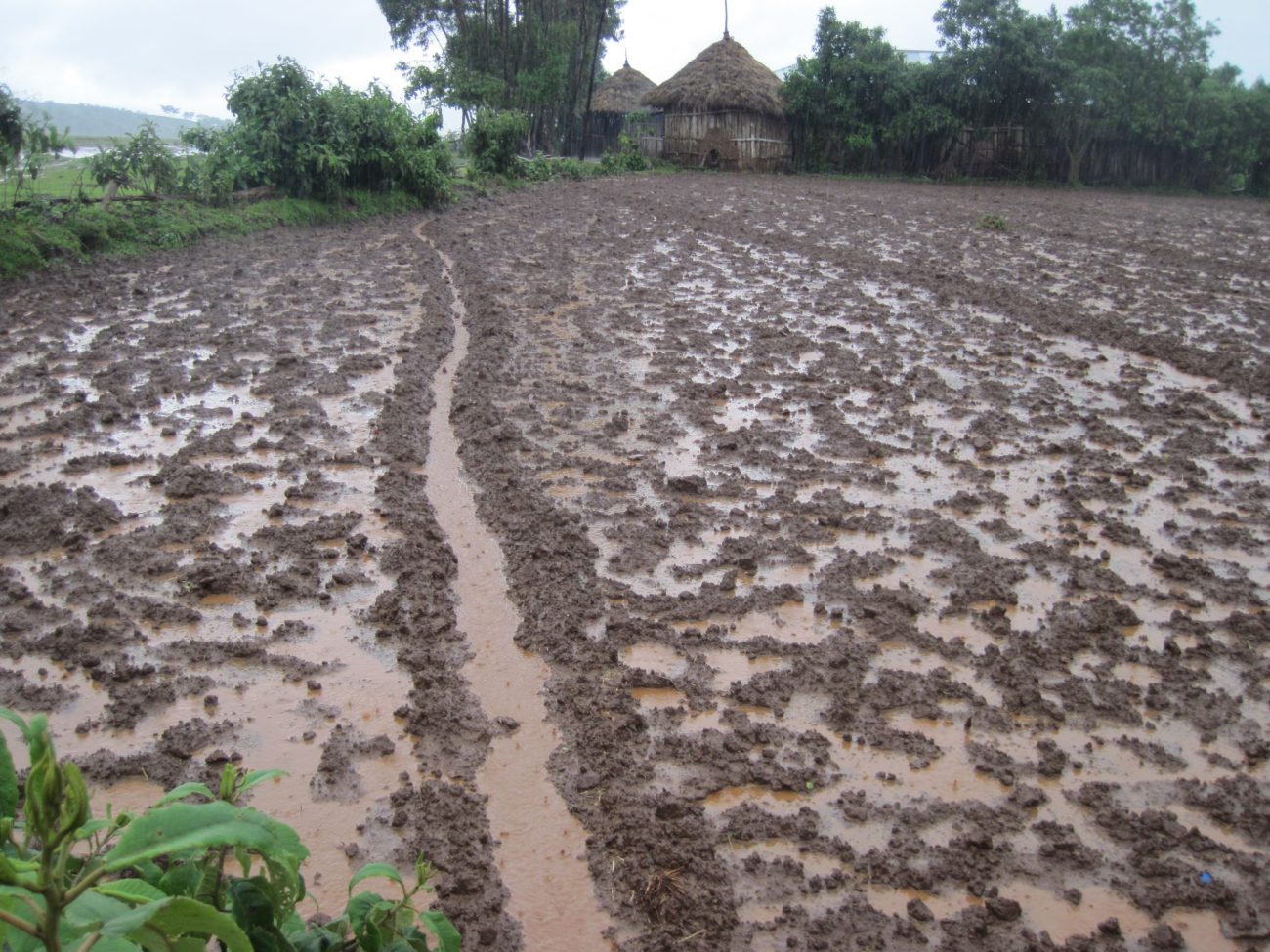 On 9 July 2010 at around 5 pm, a raindrop hits Mr. Workeh’s plot where he had planted wheat three weeks earlier. The drop detaches some soil particles and starts its journey down to the Jedeb River. Fifty millimetres of rain had fallen earlier that day and saturated the ploughed 30 cm soil layer. The compacted soil layer immediately below, the so-called plough-pan resulting from the many repeated earlier ploughings, made it difficult for the water to infiltrate. The drop flows quickly to the nearby furrow, which intercepts it and transports it to the plot boundary. Workeh had subtly increased the slope of the furrow along its way to accommodate more water as it flows down. He derives this knowledge from his long experience with draining the plot: heavy rain showers turn steep furrows into gullies. Furrows that are not steep enough overflow and flood the plot. Too many furrows cost energy to construct and use up part of the cultivated land. Too few furrows create harmful overflows that erode the soil. After travelling 15 metres through the furrow, the water reaches the plot boundary. 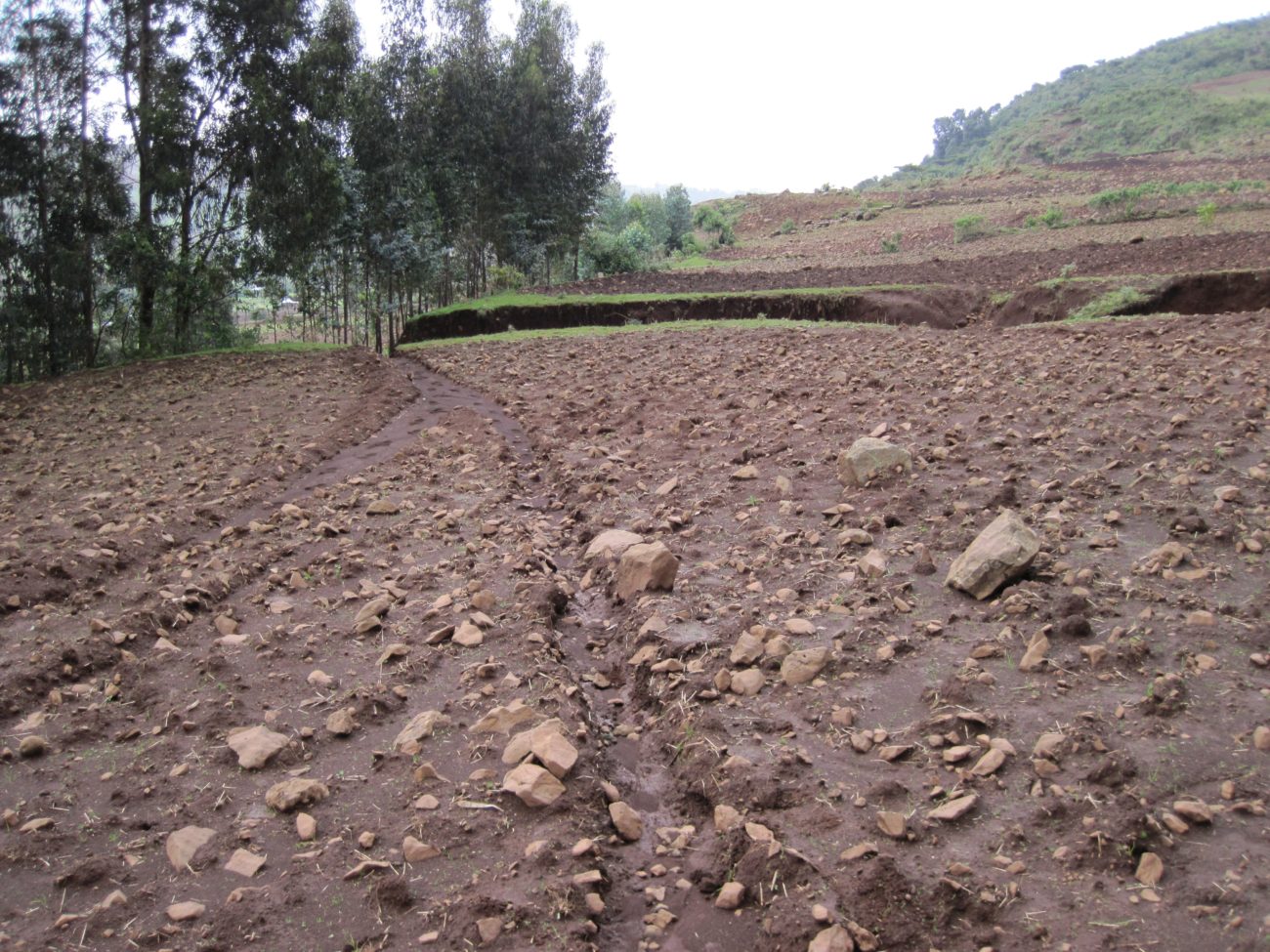 Here, it joins the water from the deforested hillslope and from the neighbouring plot. The drop now moves along the boundary between the two plots straight down the slope. It speeds up. Every eight or so metres another furrow adds water to the drain. The concentrated downhill flow scours the drain and deepens it. To reduce the scouring, Workeh had covered the drain with stones. Despite his efforts, earlier flood events had already created a 1.5 metre deep gully over the last 10 meters of the boundary. 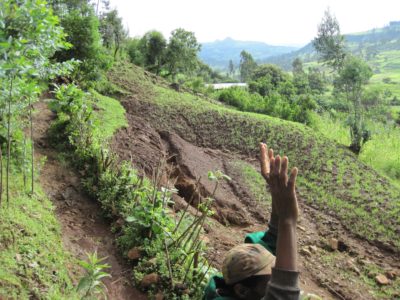 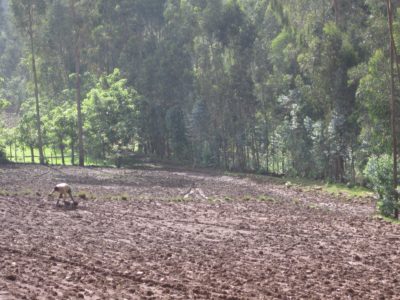 The water flows 30 metres down a steep part of the hillslope with eucalyptus trees and quickly reaches Mr. Abebe’s house and vegetable garden. Fifty metres further, the drop ends up in a protected drain. Abebe had managed to fill the ‘man deep’ gully along his plot by planting eucalyptus trees at both sides and constructing check dams every 20 metres. As the protected drain is too small to carry all the water down, it washes over a fifth of Abebe’s plot and destroys half of the young maize plants on this part of the plot. 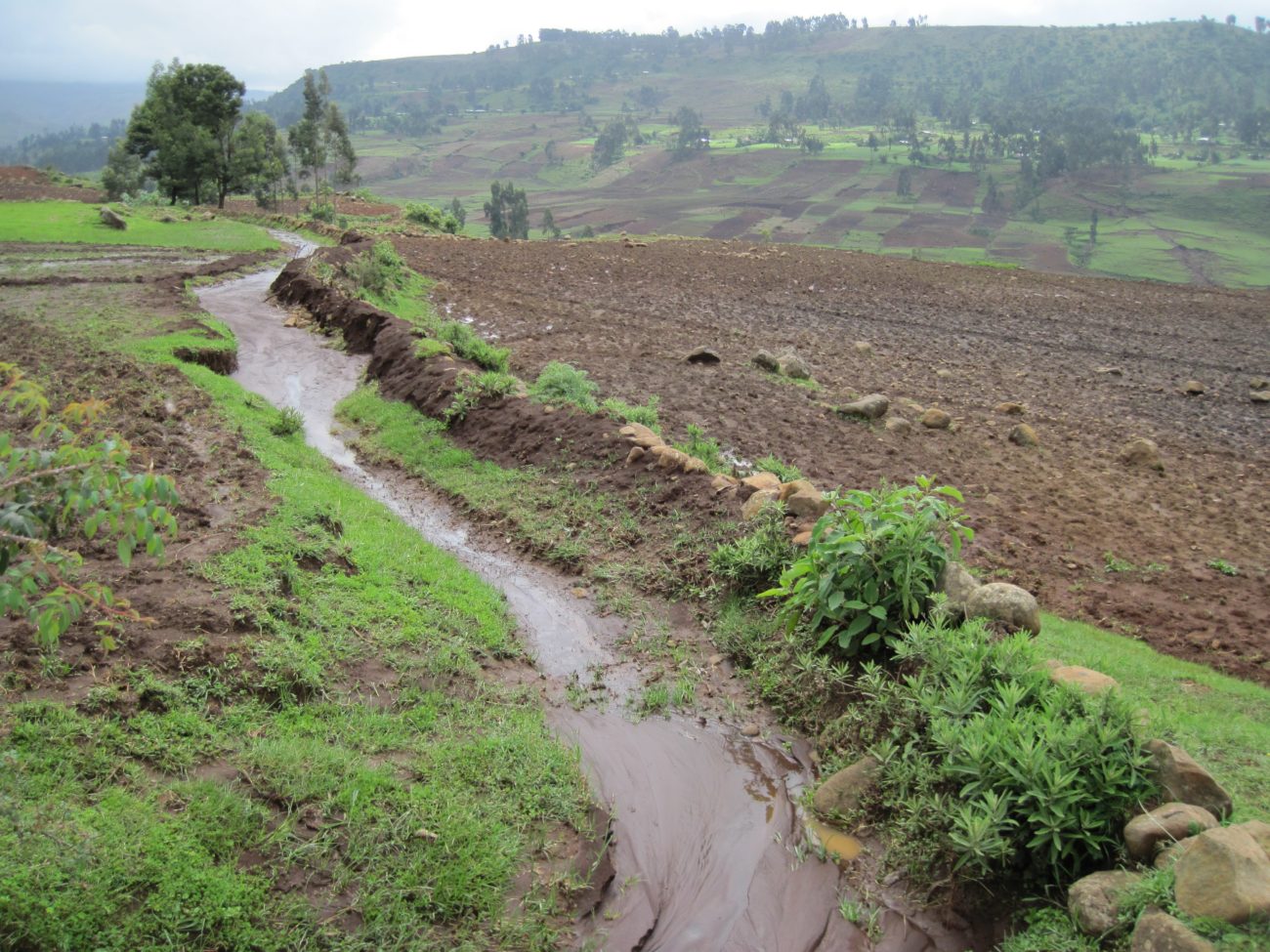 Just before the water reaches the head of a 7-metre deep, 45-metre wide, 330-metre long gully, it hits stones that force it to make a 90-degree turn towards the south. It is here where a diversion was made in 1998 when the gully approached Ms. Yelfin’s house. The sudden turn slows the flow and makes the coarse soil particles carried by the water deposit and clog the drain. The overflowing water washes Mr. Behailu’s plot and buries his small wheat plants under a layer of fertile soil. The rest of the water and soil continue through the drain until it reaches the plot of Mr. Yohannis, who blocked the flow with stones that direct the water down the slope. 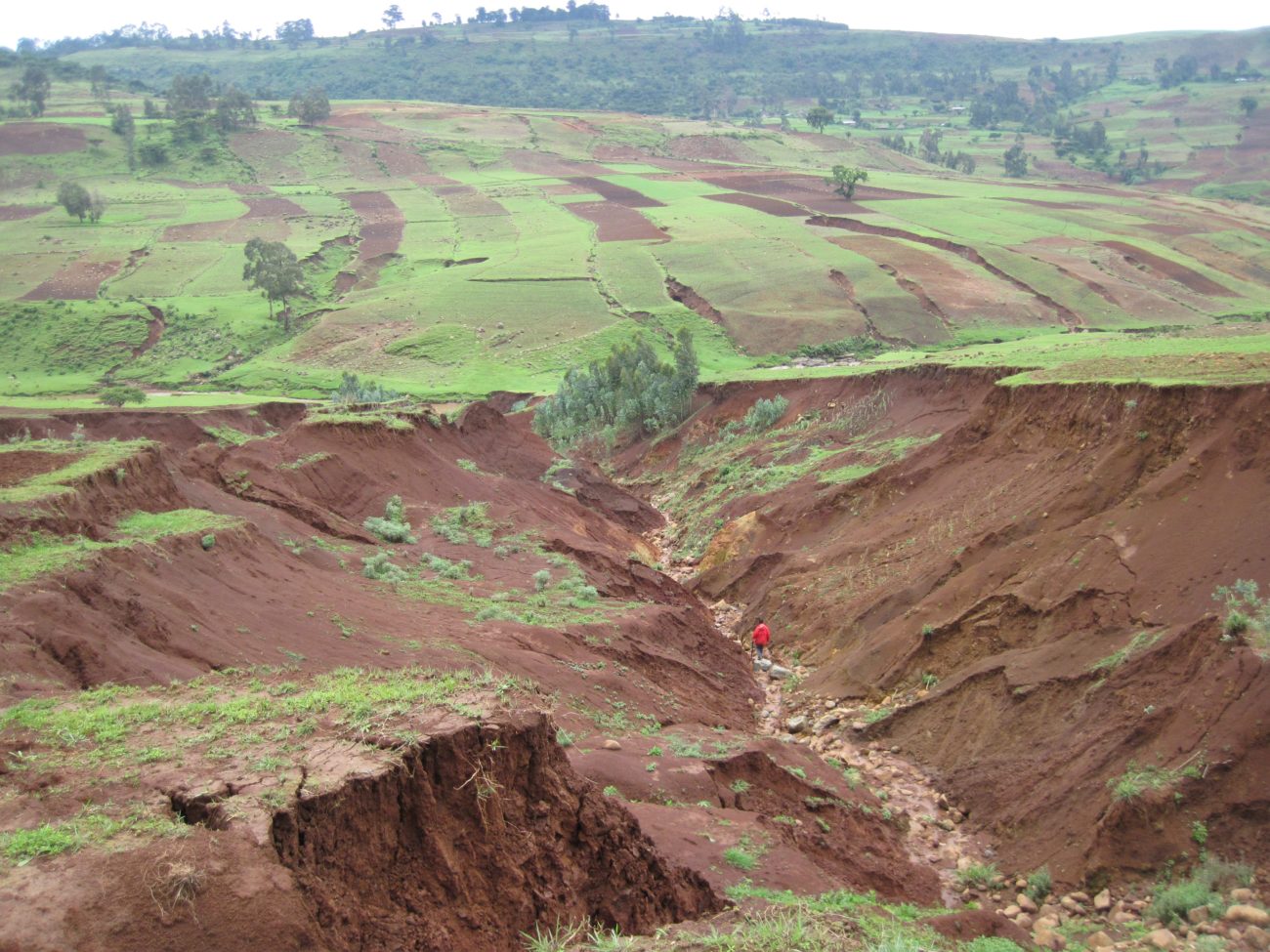 The water drop moves along the plot boundaries until it drops into a gully that takes it to the river. This gully had emerged a year after the diversion in 1998. Within two years, a 3-metre wide gully developed. From the riverside, it ‘grew’ up the hill eating into six plots along the drainage route. Since then, the gully has grown 230 metres long, 70 metres wide, and 8 metres deep. 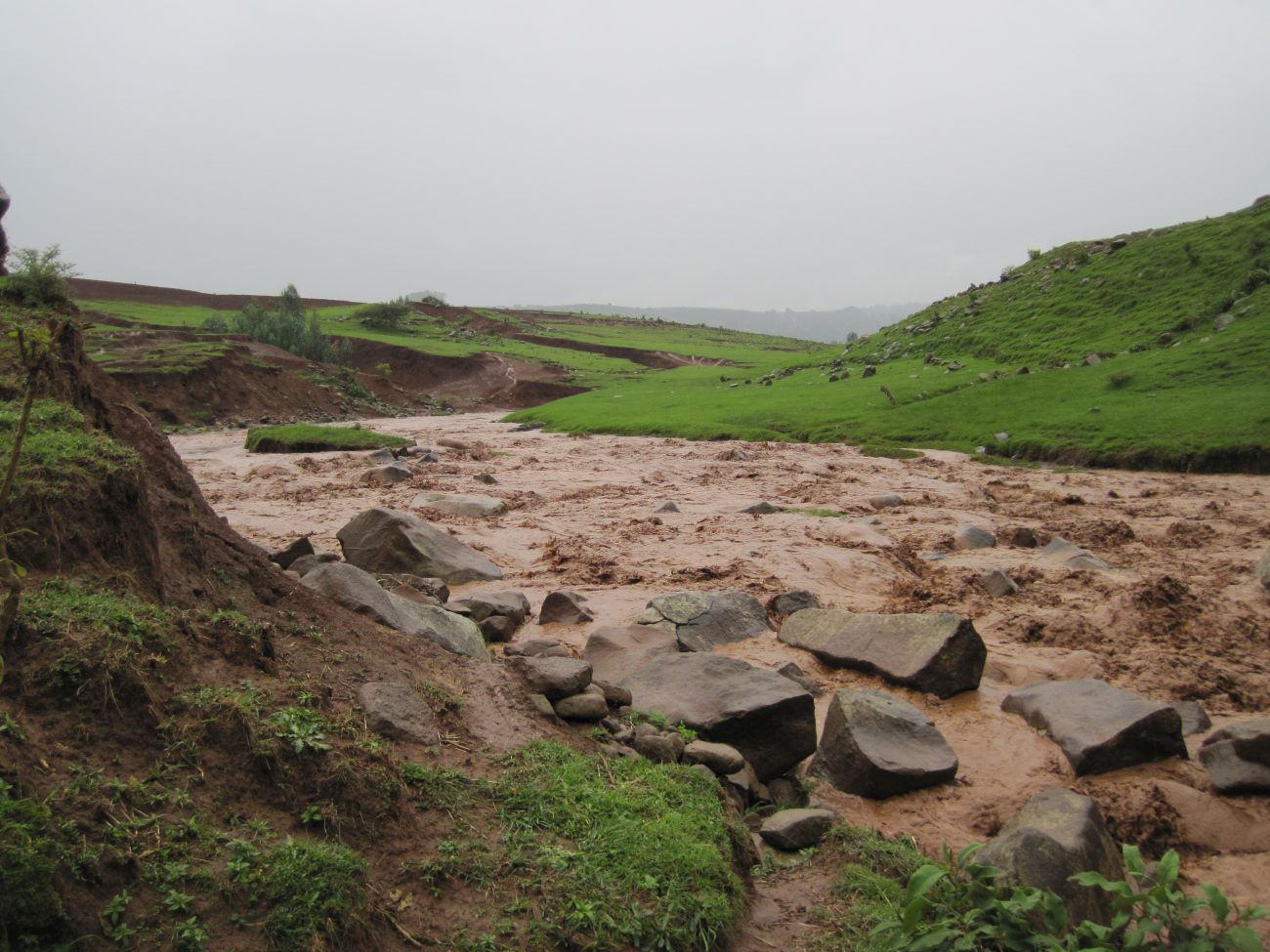