#ItsMyDam – Genealogy of a hashtag

A viral Twitter campaign, #ItsMyDam, captures the deep emotional connection of Ethiopians to the River Nile and shows the growing influential role of social media in Nile politics.

During a press conference in January 2020, Seleshi Bekele, at the time Ethiopia’s Minister of Water, Irrigation and Energy, was asked if the government was planning to start filling the reservoir of the Grand Ethiopian Renaissance Dam (GERD) during the upcoming rainy season. The Minister, with a tone of pride and defiance replied that indeed that was the plan, adding “It’s my dam” to emphasise the determination of the Ethiopian government and the obviousness of its decision. To reinforce the message he also asserted that Ethiopia “did not even engage in negotiations with regard to the first 4.5 billion cubic meters water filling process”.

This emotive statement coupled with his confidence ignited a viral campaign led by Ethiopians on Twitter with the hashtag #ItsMyDam and generated a number of articles on the subject. One tweet concisely summed up the minister’s response, saying: “This is what you call a swag with a cause” (2). Others rallied Ethiopians to echo the sentiments, exhorting: “Yes, All Ethiopians should say it out loud!” (3) and “speak up now for the GERD” (4). 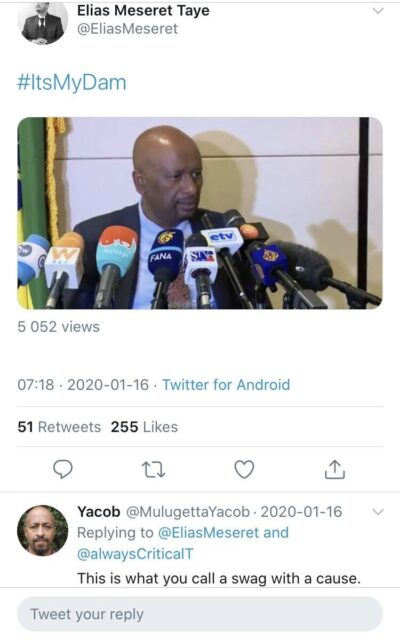 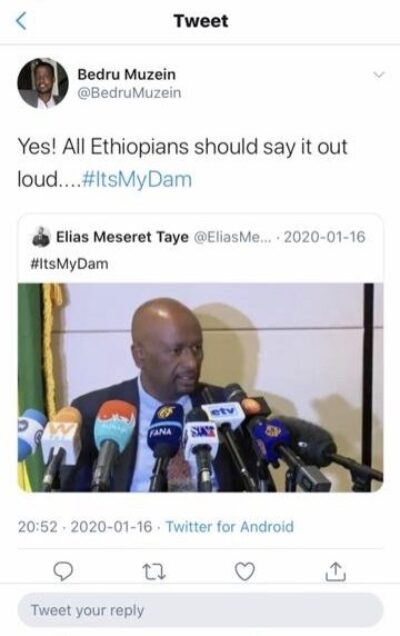 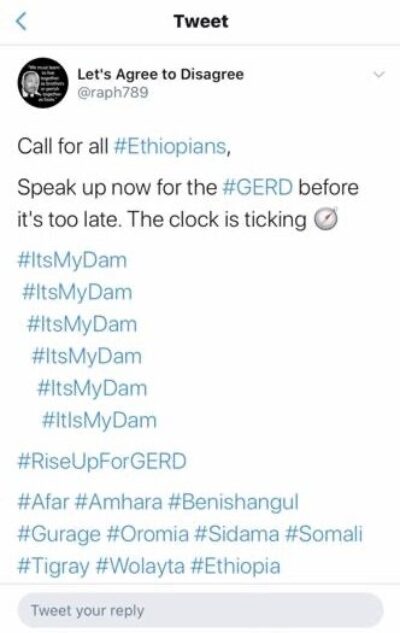 Love of the Nile

The Nile, which is shared by 11 riparian states, is an important river for more than 300 million people living in the basin. Three countries – Ethiopia, Egypt and Sudan – heavily rely on the Blue Nile, a major tributary of the Nile River, which originates at Lake Tana in Ethiopia and passes through Sudan and Egypt before joining the Mediterranean Sea.

The Nile is not only an economic resource, but also holds an emotional value for the populations it serves. The ebbs and flows of the river have shaped the socio-cultural and psychological makeup of the people. The Nile is an identity marker. The everyday popular cultural activities of the people of the Blue Nile Basin illustrate the special place the river has in the collective memory of the three riparian states. This ‘everyday Nile’ – which itself has become a trending hashtag on social media – and the feelings it evokes, underpin Nile politics in general and the ongoing negotiations of the GERD in particular.  The #ItsMyDam Twitter campaign is a case in point.

Ethiopia started constructing the GERD, Africa’s largest hydropower dam, in 2011 and since then the dam remains a major issue of contention among the three Blue Nile riparian states. Ethiopia, as an upstream country, argues that it has a natural right to utilise the Nile waters. Moreover, it asserts that the dam is a hydroelectric dam that does not consume water. Egypt, meanwhile, firmly expressed its fear that the GERD will reduce its water share and breach the 1959 Nile waters agreement – a treaty between Egypt and Sudan that allocated 55.5 billion cubic meters (bcm) and 18.5 bcm for the two countries respectively.

Ethiopia is neither a party in nor was allocated any drop of water by that treaty. Sudan, as a mid-stream state, has been trying to strike a balance and optimise benefits both from the GERD and the 1959 agreements. These contrasting positions have been at the centre of the Nile waters dispute in general and the ongoing GERD negotiations in particular. 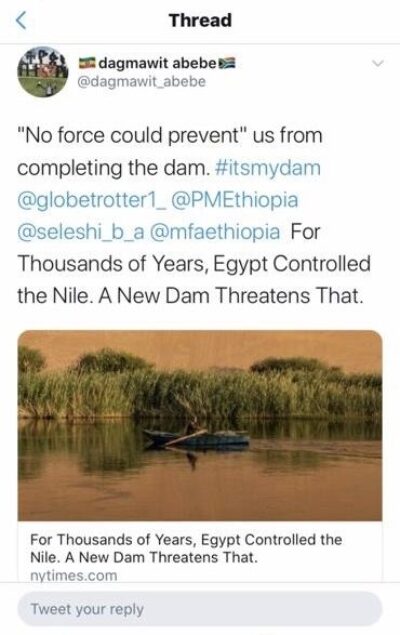 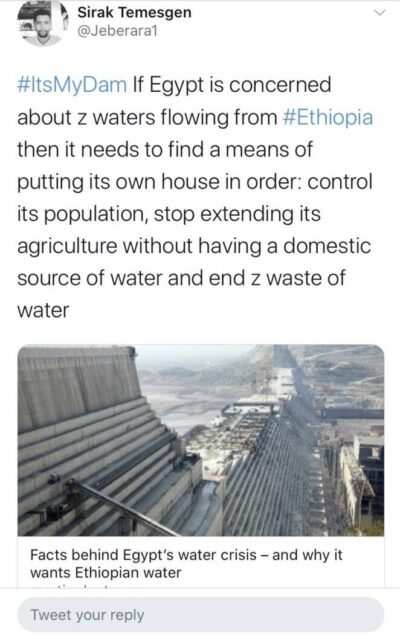 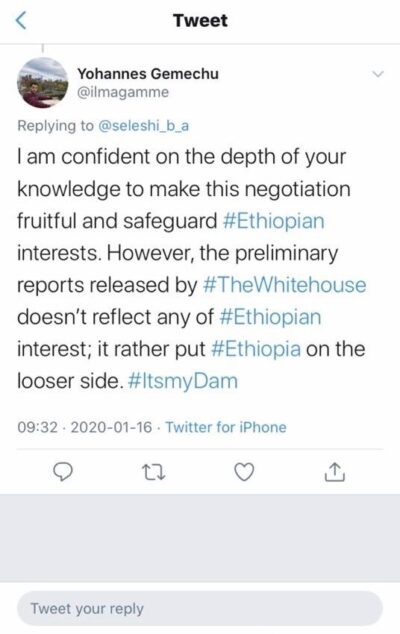 By tapping into Ethiopia’s national pride, the #ItsMyDam campaign has sparked a new emotional currency that propelled a new vibe in the Ethiopian public opinion on the Nile river, previously toned down because of the corruption case around the dam. In December 2019, Ethiopia charged around 50 people, including the former head of the state electricity company and the former deputy head of military-run industrial conglomerate METEC, with corruption in relation to a 5.1 billion Ethiopian birr (about $159 million) contract awarded to METEC to clear a forest area as part of the dam project, according to media reports.

Interestingly, however, most of the #ItsMyDam tweets are in English, rather than Ethiopia’s working language Amharic, facilitating a global social media debate and ensuring that the message is heard beyond national boundaries. 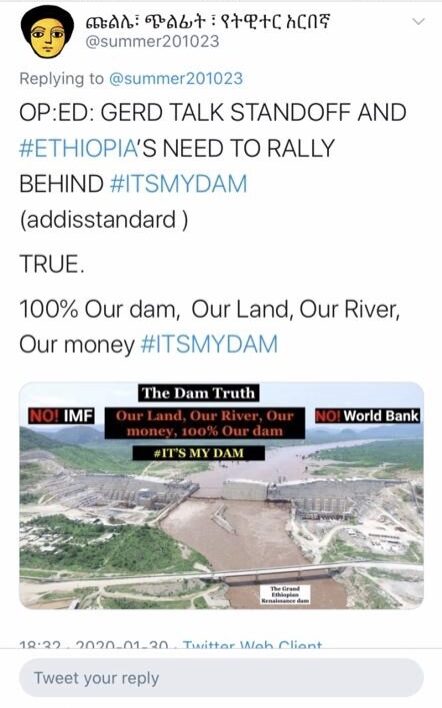 In the past years, Ethiopia, Egypt and Sudan have been negotiating on how to fill and operate the dam. The intense rounds of negotiations facilitated by the United States and the World Bank at the end of 2019 and at the beginning of 2020, have surfaced both optimism and suspicion. The #ItsMyDam hashtag was used to inflame emotions by declaring the GERD as an Ethiopian-only facility. As shown in an internet meme (9), the contributions of the international community have been met with nationalist narratives: “Our Land, Our River, Our Money. 100% Our Dam”. 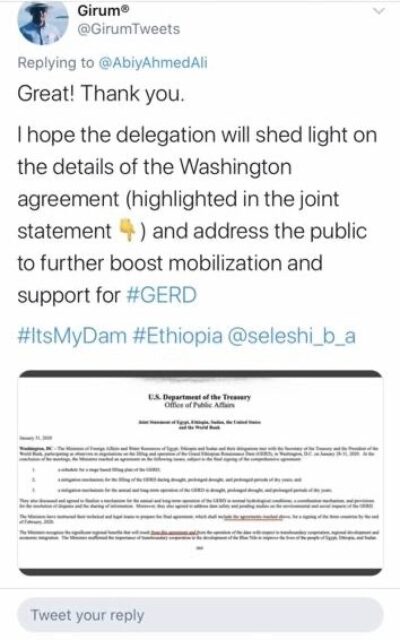 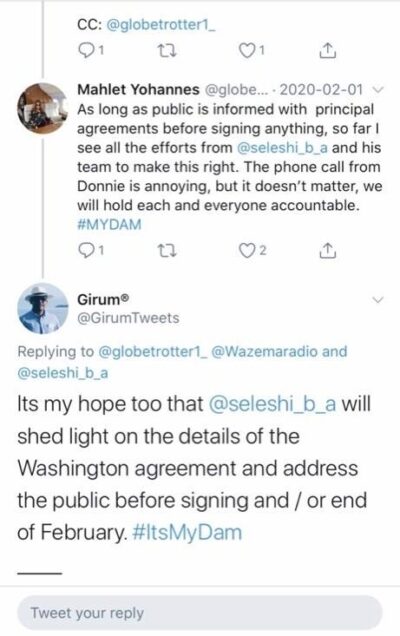 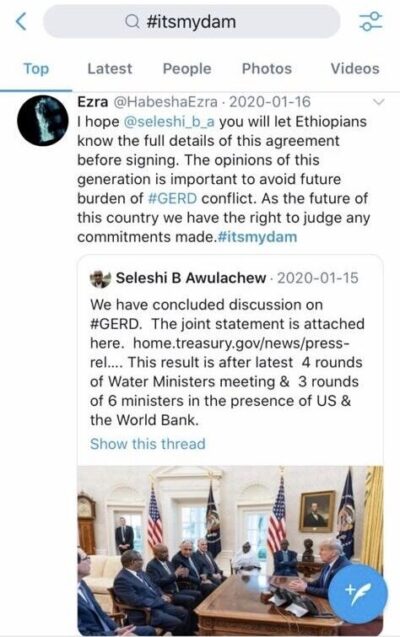 The same hashtag was also used to demand transparency on the ongoing negotiations over the filling and operation of the GERD. The campaign passionately followed the closed-door negotiations, calling for people to be informed before any deal-signing (10, 11). In a tweet replying to the water minister, Twitter user @HabeshaEzra cautioned: “The opinions of this generation is important to avoid future burden of the #GERD conflict. Representing the future of this country, we have the right to judge any commitments made: #ItsMyDam” (12). 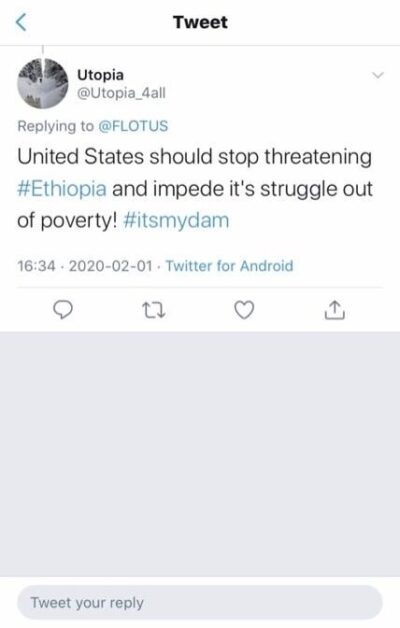 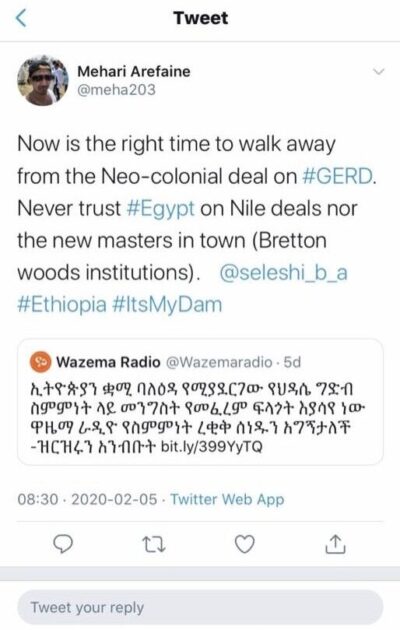 Many Ethiopians have expressed on social media their concerns over the involvement in the GERD negotiations of the US and the World Bank. The last round of negotiations between the three countries were held at the end of January 2020 in Washington. During the talks, the hashtag #ItsMyDam was used as a platform to lobby Ethiopian negotiators not to surrender to the imperialist demands by the US and the World Bank, which according to Ethiopians were favouring Egypt (13, 14).

Most of the  comments under the hashtag #ItsMyDam warned against signing any deal that could have compromised Ethiopia’s national interest, while some even called for a complete withdrawal from the negotiation table facilitated by the US and the World Bank. This may have pressured Ethiopian negotiators and the Ethiopian Ambassador to the US to insist on Twitter that Ethiopia would not compromise its national interest at any expense. And it demonstrates the effectiveness of the hashtag in terms of holding politicians accountable, at least on social media. On the other side, the hashtag was also used to echo and promote the agenda of the Ethiopian government, like for instance the posts that commended the Ethiopian Prime Minister Abiy Ahmed’s request for South Africa, as the current chair of the African Union, to lead the GERD negotiations, in the name of the principle ‘African solutions to African problems’.

The story of the hashtag #ItsMyDam tells how the mainstream narrative about the GERD in Ethiopia results from a combination of top down and bottom up communication. Coined by a private Twitter user who captured an incisive expression by the Ministry of Water and Irrigation, the hashtag became viral as it taps into national feelings and collective emotions around the iconic river Nile, possibly even influencing the ongoing negotiations on the GERD.