Hag Gomaa is an older fish farmer from the Ababda, a Bedouin clan, with roots in Sudan and Saudi Arabia. His land lies North of  the Salam canal (North Hussainia). Although the government planned this as agricultural land, to be irrigated with Salam canal water, the majority of people do not practice agriculture but aquaculture (fish farming). Besides the custom, the land’s suitability, and higher profitability of that activity, people also continue pond-based fish production because the drainage infrastructure was never finished. 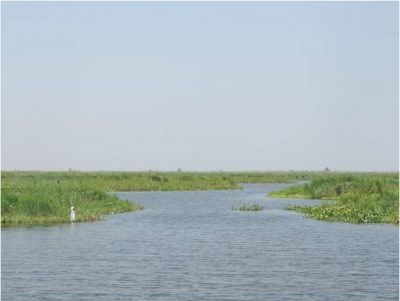 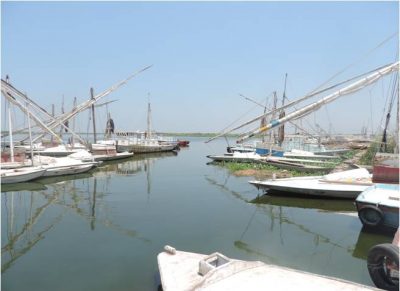 When they came, this area was a lake, the “Manzala Lake”. Hag Gomaa’s father, arrived in 1907 and settled near the elevated banks of the Ramsis drain. In 1959-1960, Hag Gomaa moved with his own family to this area called North Hussainia. They found people living on the islands in straw houses. They also built a straw house for themselves. In the winter and when it rained, they used to cover their heads with palm baskets. Sometimes, they stayed in their feluccas (boats, see picture). They lived as fishermen in the open lake. 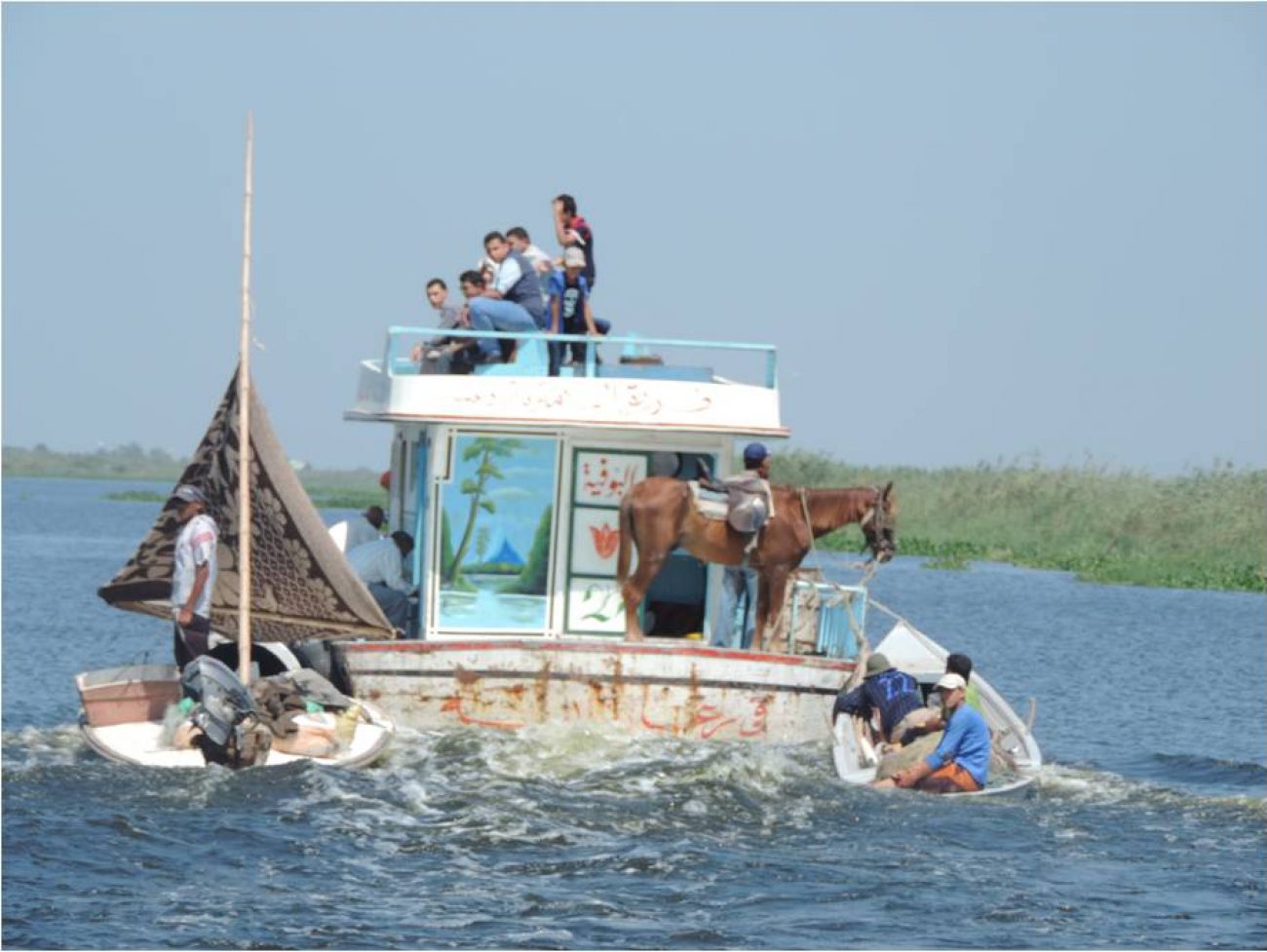 For food supplies, there was a ship from Mattarya (fishermen village), carrying 5 kilos of flour and five kilos of wheat for them to eat. They used to trade the fish from the lake with those food items (photo shows current-day version of such a ship).

To collect the caught fish from the lake they used to go into the water with a palm basket. They stayed the whole day on and in the water to catch the fish, either to eat it or sell it to the Mattarya ship. This was very tough. In the winter some people even died, he added, after catching a cold from staying for a long time in the cold water. (The picture shows an adaptation of the ancient fishing technique, still used in the Salam canal). 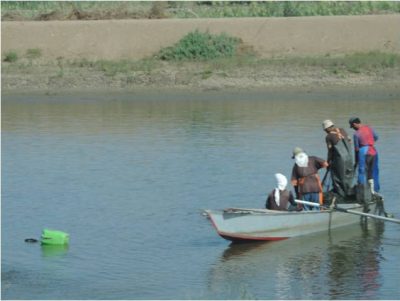 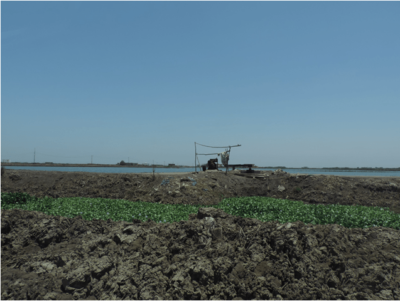 Through time, people increasingly demarcated basins, using small dikes, vegetational growth and sedimentation. They claimed and defended land and fish ponds, often also involving weapons. The dry and wet lands and their productive use extended as the water level subsided. Around 1985, Hag Gomaa started to change to fish farming, because of the Salam Canal establishment (1984). A few years later, Hag Gomaa lost the land on which he lived and farmed on the southern side of the canal without compensation. It was sold to investors and developed for agriculture. Hag Gomaa and the people he lived with decided to only defend one area, North of the Salam canal. 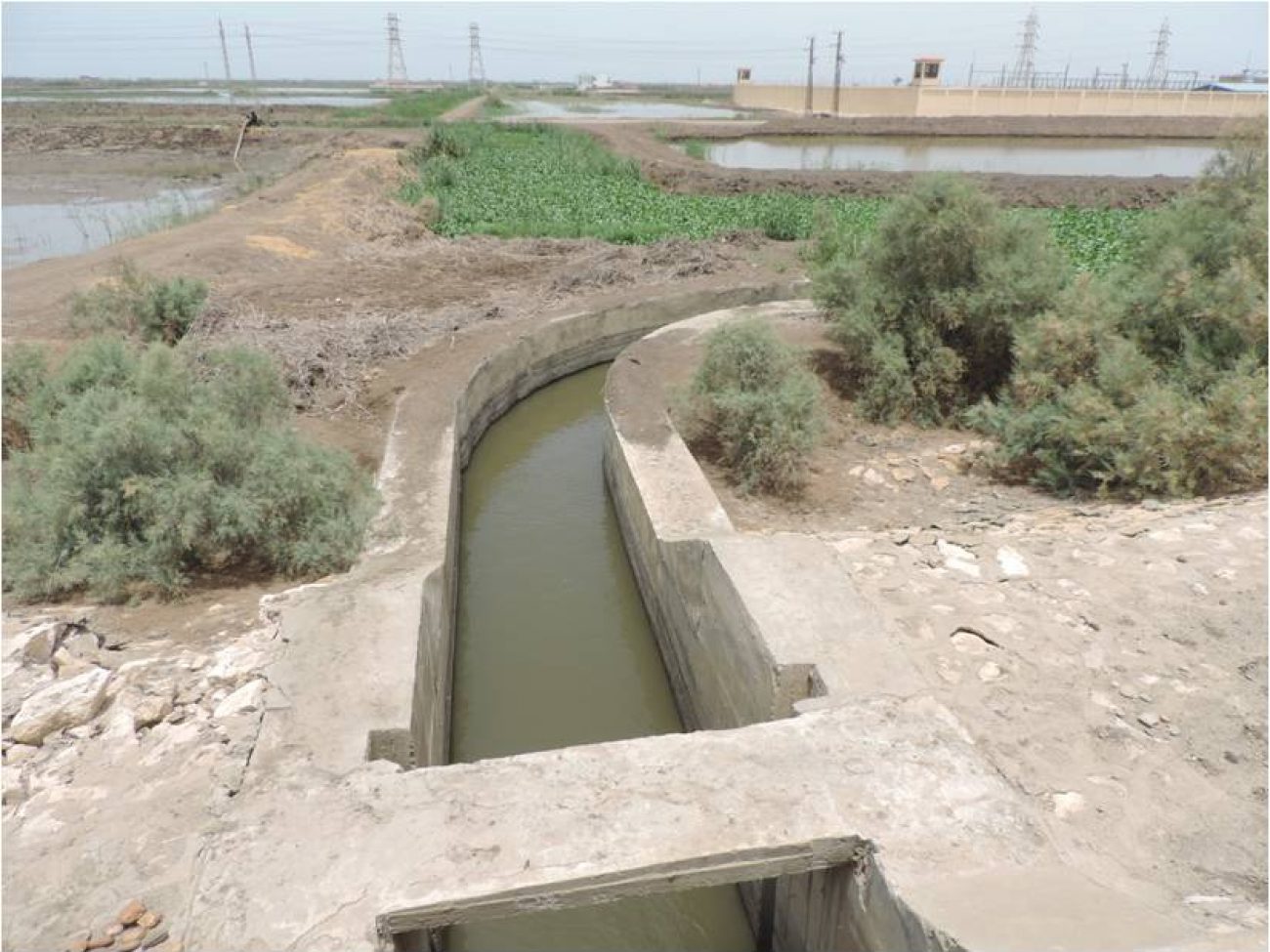 The fish farmers here provide water to their basins from the main water source, an intake at the Salam canal, although this is officially not allowed. The Salam canal water they get is a mixture of irrigation and drainage water. The water they do not use flows through a siphon under the Suez Canal to Sinai. 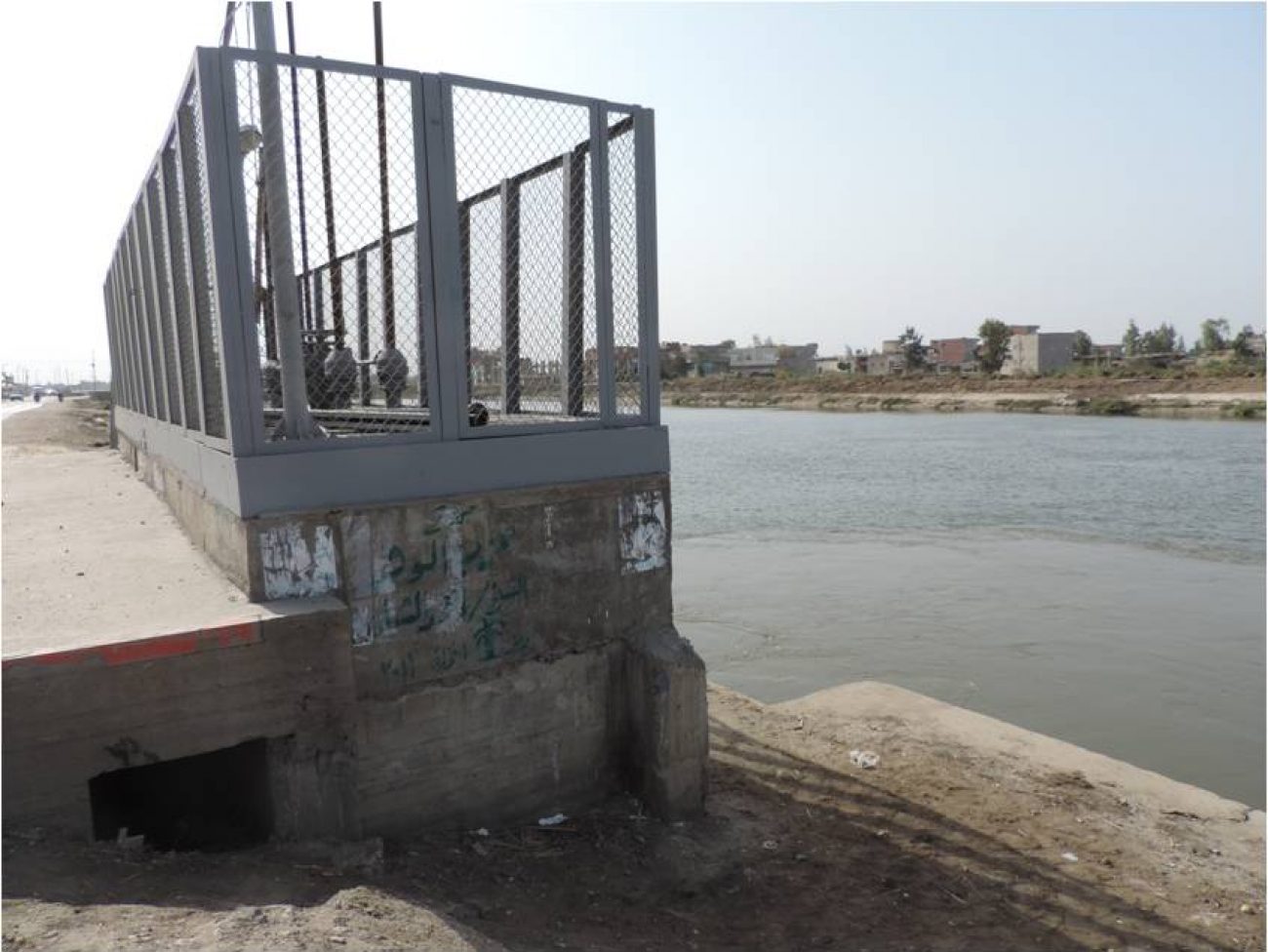 According to Hag Gomaa it was a good decision to dig the Salam canal because before the canal there was no irrigation system. However, because people started mixing clean water with drainage water, the water that reaches them is not pure Nile water anymore. (Photo: mixing point Salam canal, with different water qualities). 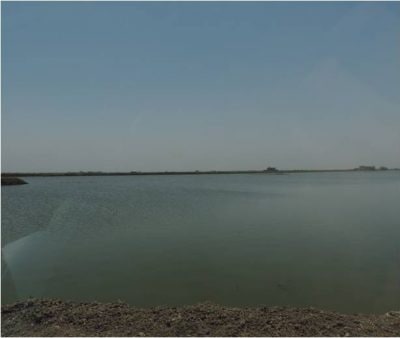 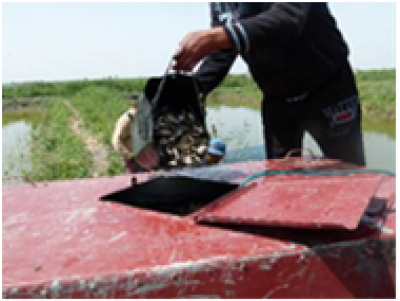 The family produces small fingerlings and also makes its own fish food. They do everything themselves. The fish season starts in April and finishes in December. The fish is ready in October but they often keep them longer in the ponds to fetch a better price. 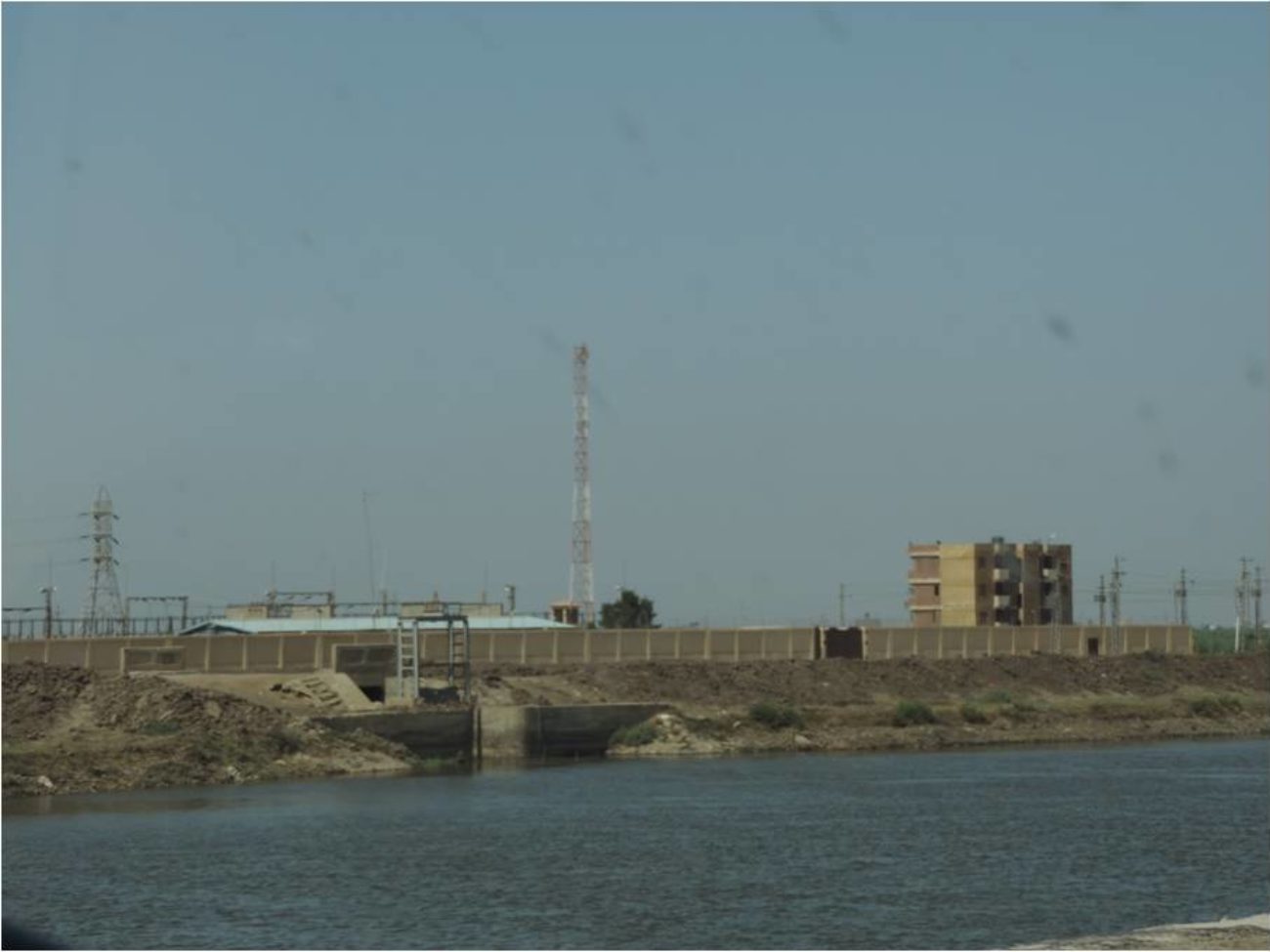 In the 1990s, a reclamation company tried to remove these Bedouin people, as they were not the legal owners of the land. Instead the land was handed to settling retired government workers. The Bedouin people resisted however.  While the men withdrew in order not to be arrested, the women went ahead and put their young children in front of the tractors to stop the machinery removing their houses. This stopped the machinery. Finally, the Minister of Agriculture agreed that these people would not be removed from the land, if they paid rent and taxes. The people cheered, praised God and thanked the Minister. 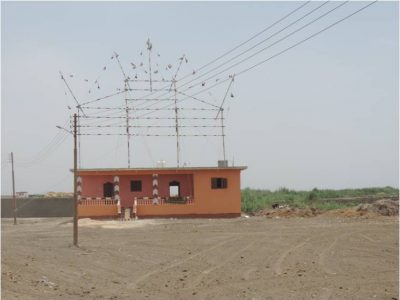 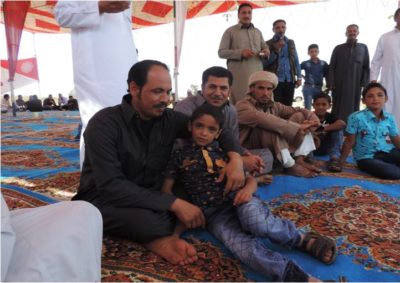 Weddings are important festive occasions that are publicly announced and at which many Ababda meet with each other, socialize and strengthen their family and clan relations.