After millennia of accretion of mud that originated from the Ethiopian highlands, the growth of the Nile Delta in Egypt was suddenly reversed in the 19th century (Mikhail 2011). This turnaround was all about perennial irrigation for cotton cultivation. Before this shift, crops were cultivated on soaked lands on which the receding annual flood had left fresh sediments.  The long growing season of cotton required tapping into the summer water before the flood arrived. To enable this shift the Ottoman rulers conscripted labourers to construct barrages and embankments on and along the Nile to raise the ‘summer water´ above the landscape for irrigation and protect the crops against the ‘flood’ water that would follow. Whereas before, the flood would turn the delta into a vast lake, the barrages, banks and canals that enabled perennial irrigation ‘inverted’ the hydrology of the delta and kept it dry when floods were arriving (Hamdan 1972, p127, Brown 1896). In less than a century cultivation in almost the entire delta was transformed from flood irrigation to perennial irrigation. With the increasing storage and consumption of water, the supply of sediments to the delta was severely reduced and the shoreline started retreating.

Perennial irrigation was far from just an Egyptian affair. Grains levied from peasants were sold on European markets to finance the manufactured goods and labour for construction of new canals, pumps and railways. The conscription of Egyptian farmers, the Ottoman conquest of Sudan for providing slaves (1821), and the forced production of cotton would tie millions Egyptians and Sudanese into the British imperial economy. Not only would cotton cultivation make farmers themselves increasingly dependent on food and fertilizer from foreign markets; to finance the expansion of cotton infrastructure, the Ottoman rulers sold land to European investors and turned communal lands into private property that could be taxed (Tignor 1966, Mitchell 2002). Through heavy taxation, the expansion of Egyptian irrigated agriculture from 840 thousand hectare to 2 million hectare over the 19th century was mortgaged on an increasing peasant indebtedness (Richards 1982, p39). Failing to pay the debt, more and more smallholders saw their lands appropriated by national and foreign estate holders, who let them produce subsistence crops on part of the land in exchange of their labour on cotton fields. When a global economic crisis hit in the 1870s and mass revolt threatened European investments, the British army took over and occupied Egypt in 1882. The decades that followed would bring new dams and irrigation schemes to the Nile at an unprecedented scale.

British expansion of cotton production and control over Egypt and Sudan were justified by new western hydraulic calculations. For centuries water level gauges along the Nile had been used to organize cultivation based on the height of the annual flood. From that moment, the statistics of earlier recordings were used to reorganise the river. Planners and engineers imagined to tame the river through increasing summer supply and reducing floods. Distribution of water was no longer justified by the sovereign’s approval or local arrangements but conceived of in terms of land productivity and efficiency. Mapping of land and plotting of hydrographs and water balances was crucial not only to control the river and its people. The large-scale transformation to perennial irrigation not only enabled the production of cotton but also institutionalized a hydro-agricultural bureaucracy that gained increasing control over the Egyptian peasantry, and that was justified in terms of social equity. As a British engineer described it, the “system of [perennial] irrigation by rotation is of great advantage, not only in checking the loss of water in the channels, but in teaching economical irrigation of the cultivators and in ensuring an equitable division of supply among the people” (R. B. Buckley 1893, p237 quoted by Cookson-Hills 2013, p205).

The massive expansion of perennial irrigation for cotton production created modern concerns of water shortage. No longer was cultivation dependent on the height of the Nile flood, instead it became dependent on volume of summer water available for cotton cultivation. As the cotton season stretched from March to October, the area that could be irrigated was limited by the amount of water in the Nile before the flood season started in July. Because storage of large amounts of water on the flat Delta plain would require large reservoirs which would be costly to construct, take up valuable space and evaporate a lot of water, the basin was declared as the appropriate and ‘natural’ scale for organizing the river. As early as 1894, Willcocks – who would later be in charge of designing the Aswan dam – reported that upstream dams were required because storage in Egypt would be insufficient (Willcocks 1894). A British journalist in Egypt framed it as follows in 1904:

“all Nileland is one country. No divided sovereignty is possible; there must be one firm hand over all… Looking back, it is easy to see how it all followed in logical sequence. Everything depended on the Nile. The more Egypt was developed, the greater grew the need for the regulation of the Water. The rulers of Egypt need have troubled little about the fate of countries divided from them by so many leagues of rainless desert, but for the link of the all-important river” (Peel 1904 p134-135). 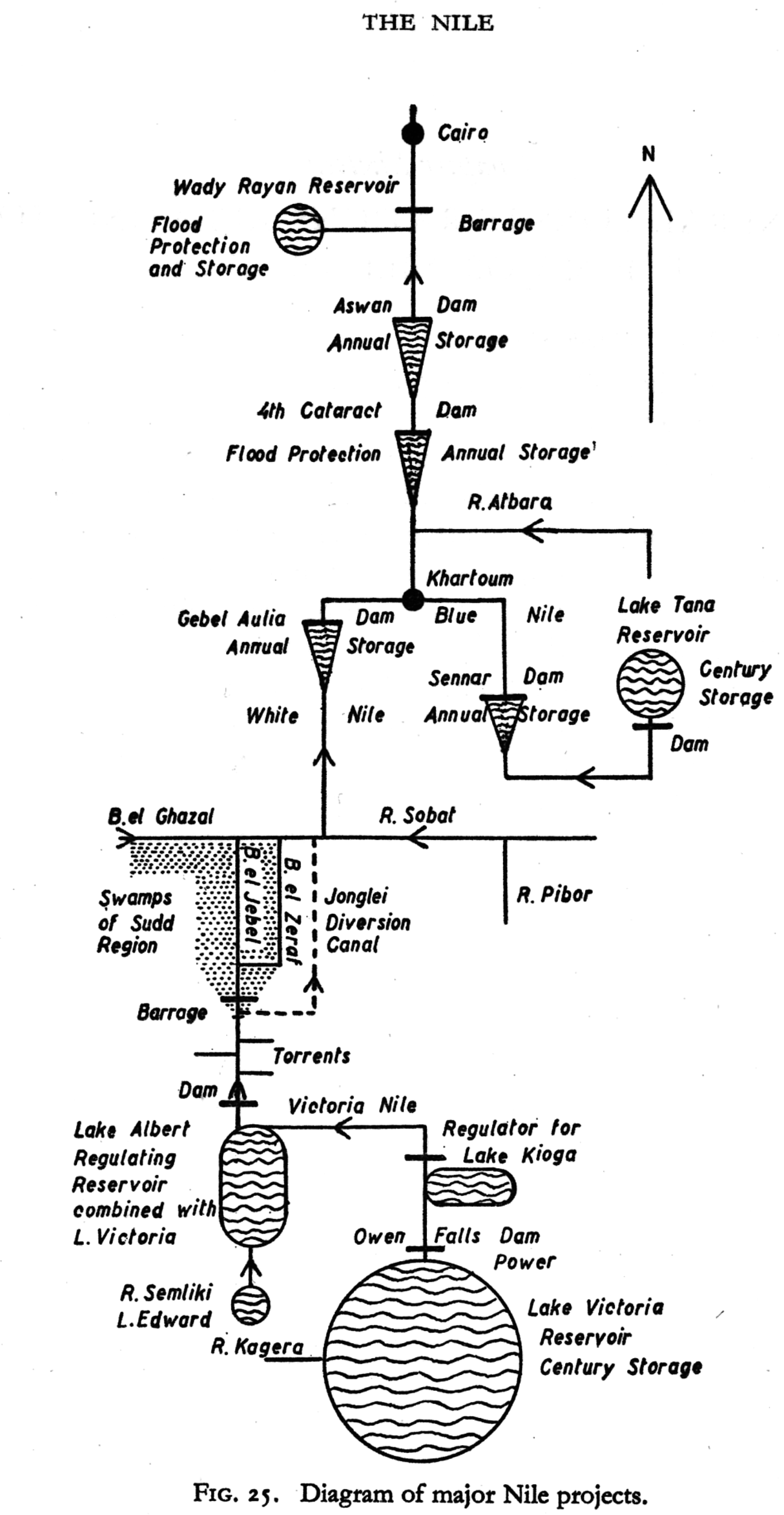 Perennial irrigation for cotton cultivation thus not only required the inversion of the Nile hydrology, it produced a new geography of water security that rested on control over the entire basin to ensure a continued and augmented summer supply to Egypt. To prevent occupation of the upper Nile territory by other European colonizers, London ordered the conquest of Madhist Sudan in 1898. Soon after the conquest of Sudan, British engineers set out for new explorations of the upper basin. The resulting ‘Report upon the basin of the Nile with proposals for the improvement of that river’ (Garstin and Dupuis 1904) identified projects for regulating the upper river to augment the supply of summer water to Egypt. The report included a barrage at the outlet of Lake Tana in Ethiopia, dams on the Blue Nile, and the construction of a new 340 km canal from Bor to the Sobat which would reduce the evaporation of water from the Sudd swamps in the Equatorial Nile region. Several storage dams in Upper Egypt and Sudan would capture water at the end of the flood season for use during the remainder of the cotton growing season and for planting of the new crop before the next season. They would be emptied at the beginning of the flood season to prevent that high sediment loads during the beginning of the flood season would deposit and fill the reservoirs with silt. During the decades that followed, British officials in the Egyptian irrigation ministry would expand and supervise the partial implementation of the proposals to control the Nile basin (Willcocks 1919, MacDonald 1920, Newhouse 1939, Hurst, Black and Simaika 1946, Hurst 1952)

This was not just mere scalar imagination or paper engineering logic. The idea of the basin being the optimal scale for what Willcocks called “securing an abundant supply of water all the year round“ (Willcocks 1904, p73) took hold in the conquest of the Sudan and the construction of annual storage dams. Convinced by the profits and calculations of the modern economy and hydrology, investors who saw European markets faltering again in the first decade of the 20th century diverted increasing amounts of capital to the Nile. The 1902 Aswan dam, the first dam on the main stem of the Nile, increased the average ‘summer supply’ by 50% and thereby enabled an increase of perennial irrigation by 210,000 hectares (Willcocks 1904, p75-76). Through the reservoir, Egypt’s position as Britain’s main supplier of long staple cotton was secured. The dam provided engineers and investors with the ‘objective’ evidence for the success of modern hydraulic development. The British journalist Peel wrote:

“Well might Lord Cromer and the irrigation engineers review their work with satisfaction. To them, the [Aswan] Reservoir means the successful culmination of a great policy long and steadily pursued, nothing less than the establishment of the prosperity of Egypt upon a sure and certain basis: for this is what the regulation of the Nile involves. In Egypt, at any rate, they require no formal monument. Their praise stands clearly writ on the face of every cultivated field throughout the country” (Peel 1904, p100). 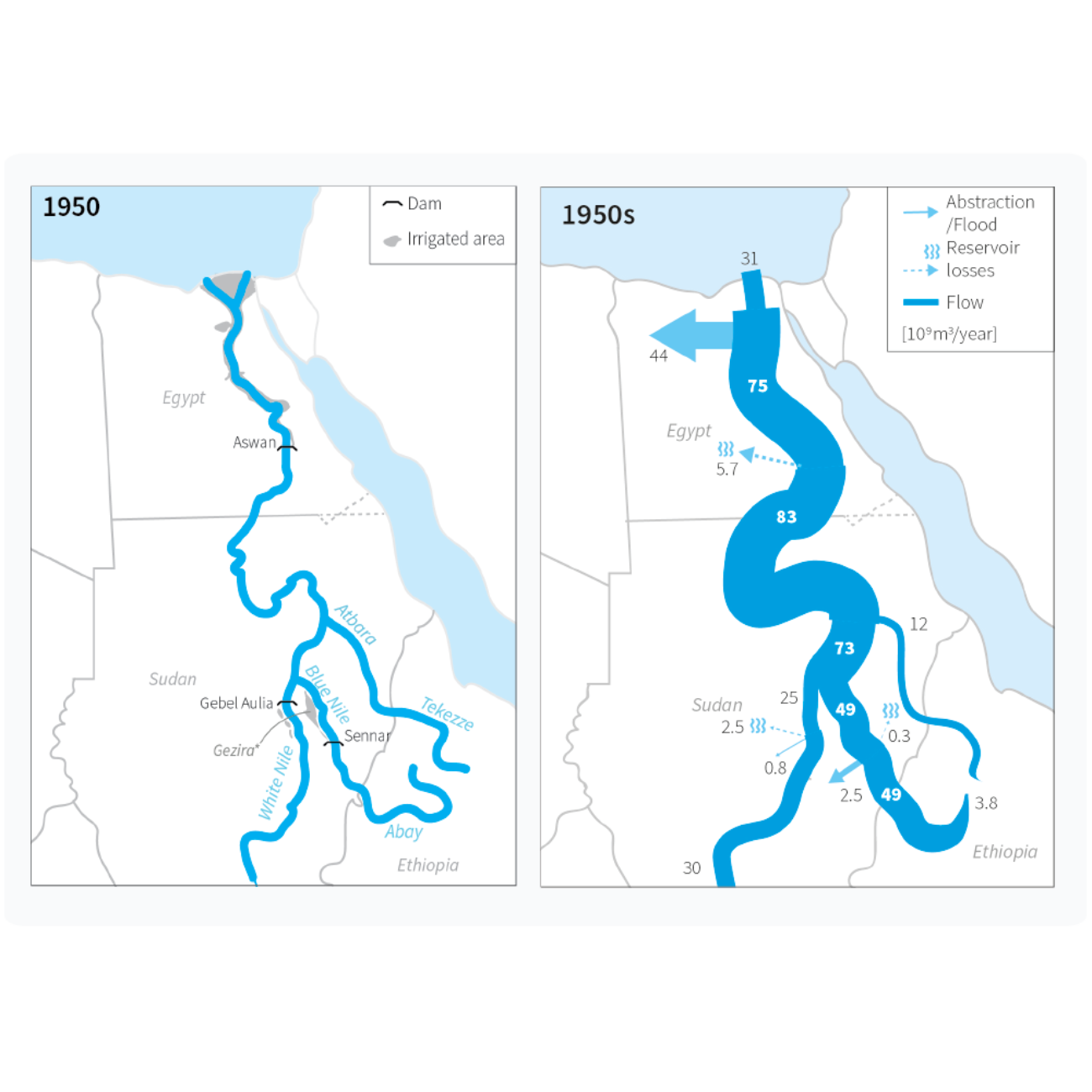 Left: Dams after the first wave of dam construction on the Nile (1899-1937) Right: an estimation of distribution of the flow, abstractions and reservoir evaporation after the first wave of large scale hydraulic construction in an ‘average’ hydrological year. Note: Gebel Aulia dam was owned by Egypt until 10 years after the Aswan High Dam was constructed (until 1977) and increased the summer storage for Egypt which allowed Sudan to withdraw more water from Sennar Dam to the Gezira. While the Aswan High Dam has made this original function of Gebel Aulia dam obsolete, around 2.5 BCM/a evaporates from the reservoir until today.
Sources for flow diagrams in this chapter: Sutcliffe and Parks (1999), Chesworth (1994), Whittington and Guariso (1983), MoI, UNDP, IBRD (1980), Blackmore and Whittington (2009), SMEC (2012), ENTRO (2015) and Molle et al. (2018).

Indeed the dam significantly contributed to rising cotton production levels at the start of the 20th century and mitigated the drought of 1905. Yet the progress of perennial irrigation never materialized for most involved in cotton cultivation. On the contrary, many smallholders found themselves in periodic debt to finance fertilizers and additional labour for the weeding and picking of cotton. To repay their loans quickly, many of them reduced fallowing by shifting from a three-year to a two-year rotation (Richards 1982, p80-83). This contributed to the increase in use of irrigation water and, with the absence of floods to flush the land, led to an accumulation of salts carried with the water in the soil: the major cause identified by British engineers for yields to drop steadily from over 100 kg/ha in 1895-1899 to less than 80 kg/ha in 1905-1909 (Willcocks and Craig 1913, p418). While total cotton production in Egypt doubled between 1885 and 1910, by 1919 more than a third of the peasants was landless and more than 70% of Egyptian cotton was produced on estates (Tignor 1966, 226-234).
As the increasing landless population came to threaten the imperial force that had intervened in Egypt, industrial cotton cultivation would not only organize the limits of control of summer water through conquest of the river basin, but also spark the rearrangement of these limits. Facing rising opposition and a global economic recession, the British government declared Egypt’s independence in 1922.

To protect its interests in the region (notably in capital invested in cotton production and the Suez Canal), it decided to retain control over Sudan and with it the water supply to Egypt. The expansion of the gigantic Gezira scheme in Sudan – originally planned to draw only non-summer water – was now seen in Egypt as a direct threat to Egyptian water supply. Following growing outrage over irrigation development in Sudan, the Egyptian and Sudanese governments installed a Nile Commission to relief tensions in 1925. In an exchange of notes which came to be known as the 1929 Nile waters Agreement, the UK and Egypt agreed that Sudan was allowed to abstract water from the Sennar reservoir, but only if it would not compromise Egypt’s summer water supply. While basin control of summer water for
Egypt was thus secured on paper and embedded in the annual storage dams built on the Nile at Aswan, Sennar, and later Gebel Aulia, the material reality of dam development of the 1930s marked the beginning of a shift towards a different model for organizing the river. No longer wanting to rely on Sudan for storage of Nile water, the Egyptian parliament decided to heighten the [original] Aswan dam and double its capacity before agreeing to the next upstream reservoir at Gebel Aulia in Sudan (see Figure 2.3). Holistic river basin planning had thus been dented. The next wave of dam construction on the Nile would take the form of national development.